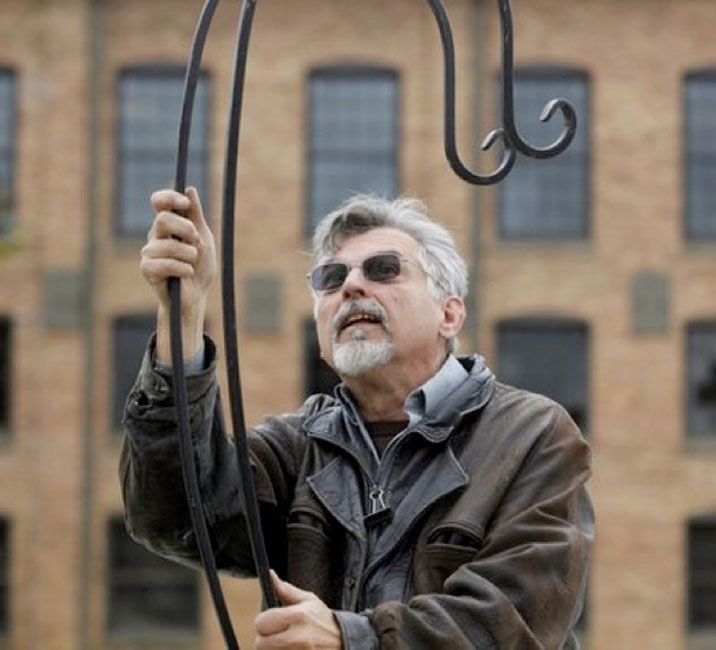 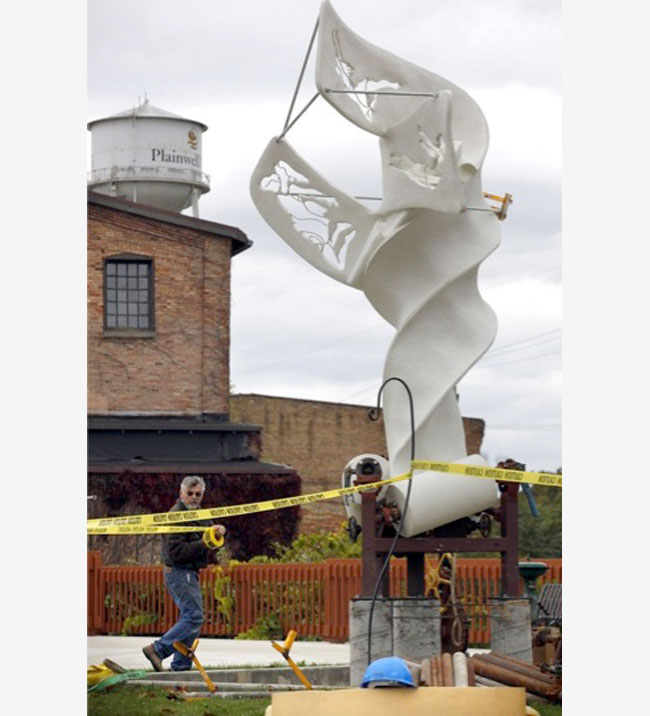 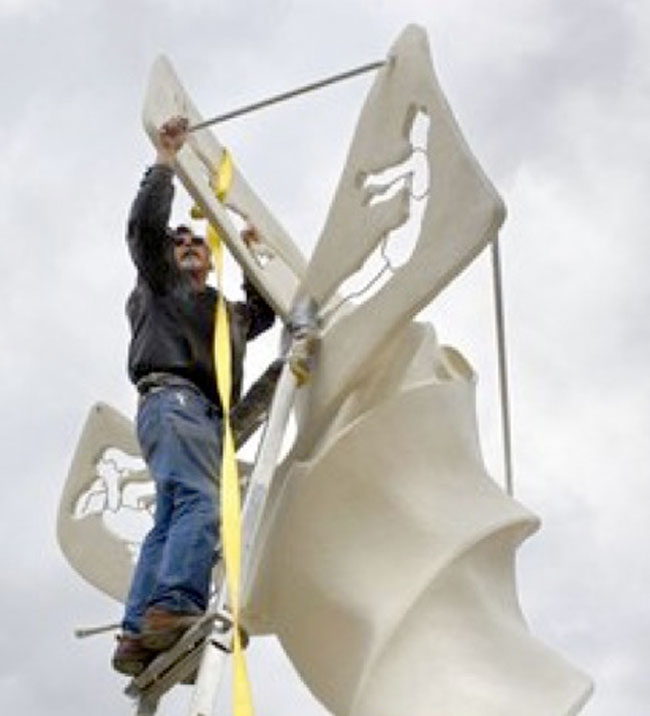 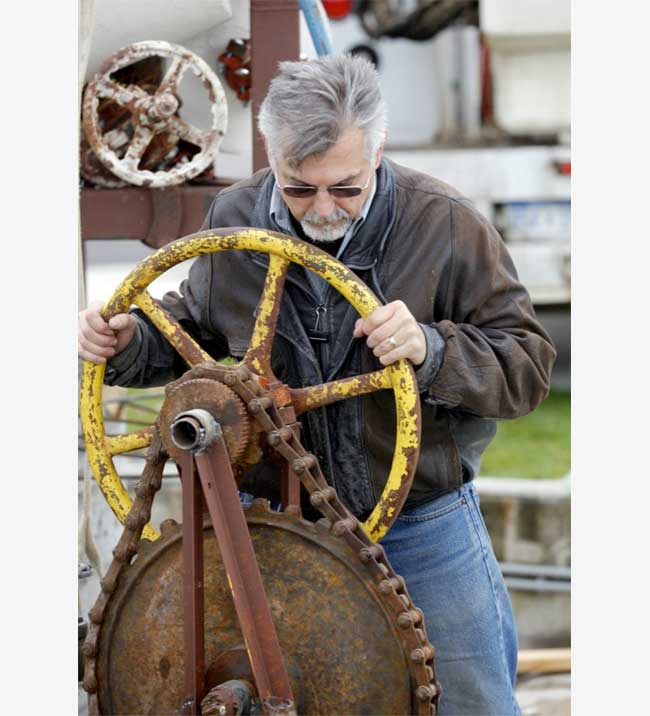 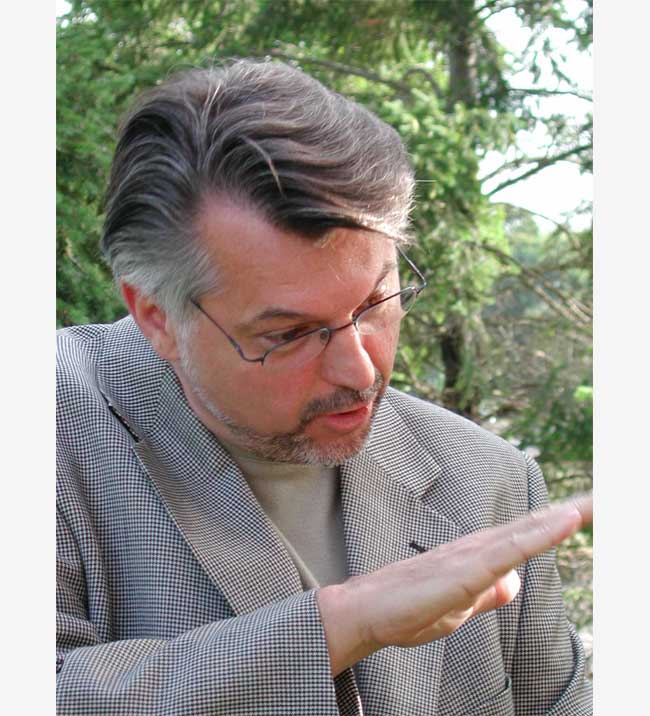 Tj has been sculpting since age 7. His career lead him to industrial design where he was successfully sculpting car interiors and exteriors for many companies and developing patented concepts for products and process.

Tj worked in Europe for a time and became a leader, developing materials to define, quantify and illustrate craftsmanship which he used to teach thousands worldwide. Tj studied "Creativity Management" and proposed and implemented many methods for industry applications.

in 2005 Tj left industry, taking all the lessons of industrial design management with him to focus on his art. Since then he has done some large installations, authored and published books on processes for large sculpture and the art management process. He has shown his sculpture around the country. He has been commissioned for large public art projects nationally.

A work of "public art" is designed for its space as opposed to art in public which is developed by the artist and set out in public (sometimes referred to as "Plop art"). Tj approaches a public art project in search for the opportunity to design the art piece that will speak to as many aspects as can be included in the work.

Tj always seeks strategic and close collaboration with all invested interests including the people in the funding organization and the public's local viewers. He believes that maximizing the buy-in from this collaboration maximizes the production of a great design.

These are all critical to a successful project. Diligence requires meeting the principal players, listening to their perspectives and getting a feel for the organization- its sensibilities, activities and aspirations.

In researching potential spaces, I typically photograph from different angles, get any available dimensional drawings and consider pedestrian traffic. What is the potential for interaction and viewer encounter perspectives? How can we get the best placement and views of the new work. I’m looking at backgrounds, activity patterns, and frames of view.

Let’s consider what a work of art might convey to specific group or audience and to target with potential collaboration with the members on concepts in order to get feedback about various concepts.

Tj has the skills set to achieve those specific goals and has the proven track record to demonstrate that project management success, both in the corporate and public art development environment.

In association with his non-profit and private sector partners, Tj has worked to satisfy the project stakeholders while producing final art projects that are popular with targeted arts' visitors.

His management of site requirements, financial and art component assets deployment and project management integration have satisfied his non-profit and private sector clients.

Consider Tj for your next art project management consulting work.

2005 to now -Sculpting and showing pieces, developing stone-coating and other custom techniques in the studio as seen in the books (Scaling Up: Big Sculpture for Little) in 2011.

'04 to '05 Creativity for Industry
I worked as an industrial design director for Johnson Controls, a $30 billion, fortune 300 company primarily in automotive. There I studied the emerging field of creativity management and assessment. I worked with some of the nations top creative people. In May, 05, I spoke at the "Front end of innovation" conference in Boston about my process, and I always was sculpting. I began working with faith based start ups in Texas, Michigan and Indonesia on applied creativity during this time creating tools for boosting creativity in the creator's church.

2000-03 Craftsmanship Systems Development
Prior to the creativity assignment I developed the craftsmanship analysis system for Johnson Controls Inc, which has been patented and imitated by other major manufacturers in appliances and automobiles. This provided the entire company with clear definitions of terms for aesthetics, a measurement system, and an "up front" control process. A key to this success was the creation of interactive teaching tools that I used to train some 4000 engineers. I traveled to Europe, Japan, Korea, and China with these workshops. I published papers on analysis with the University of Michigan's engineering department. The sculpture meadow near my home began in this period, with the car installations, and I began to experiment with color formulas for cement casting of sculptural objects. The themes of portraiture and auto influences on society merged into larger works.

Late '90s - Europe - Studio Building and Lectures
I worked as a design manager and developed workshops on "Analysis of Form" for design groups. In 1998 the family moved to Europe. There I was part of a team developing a new design studio that worked with BMW, Audi, Fiat, and many European car- makers. I recruited, set up facilities, and methodologies for studio operations. I received patents on product designs. My wife, Sarah and I saw and studied the major art collections throughout Europe. Our teenagers finished their final years of high school there. I was a lecturer and consultant to the University of Hertfordshire School of Art and Design and worked with teams from the Instituto Eurpeo Design in Milan.

Early '90s - Computers for Sculptors
My task at JCI prior to Europe was to manage the transition from clay design models into computer aided industrial design. This required educational strategies, recruiting, tech assessment and purchasing. The former Prince Corporation design group grew from 25 people to nearly 200 worldwide during this period.
Sarah developed concepts for home schooling that she used with our children. She created a method for individualized student assessment and custom curriculum development that she then applied with many families. Together we created Novus Resource Inc. to run the school and the art studio. Students graduated from the school with high school diplomas. We worked together on the concept of Zero Based Learning. I was on the Board of Directors for the Association of Professional Model Makers, and curated the local Congressional Arts Competition.

'80s
'87, '88, '89, I worked in a variety of Detroit shops as a contract Design Sculptor doing show cars and intricate wind tunnel models. The Prince Company moved us to West Michigan in 89. We had established Contemporary Studios in Colorado 1980. This company marketed my work and did development and reproduction for other artists and artisans, including pewter miniatures, bronze museum replicas, character dolls, toy and kit development and manufacture. I was elected Mayor of our small town in 84, and attracted development funds, obtained grants and saw many community improvements. Our children were born in the Rockies. Here we also developed spiritually and began working with churches and home school concepts. In 1987 the family came back to Michigan.

'70s
I was a craftsman working in Detroit in die models, boats, displays and experimental plastics. I learned precision 3D techniques and development methods for all kinds of objects. Always a political activist, I worked my way through school with two internships for the Detroit city council and jobs at the university sculpture studio, where I cast bronzes, and did some video documentary. I met and married Sarah at University and then graduated with a BFA cum laude in Sculpture from Eastern Michigan University in 1977. We moved to Colorado where we ran a production jewelry casting operation, I tooled a fiberglass kit car, and I was contracted to build an art bronze foundry.