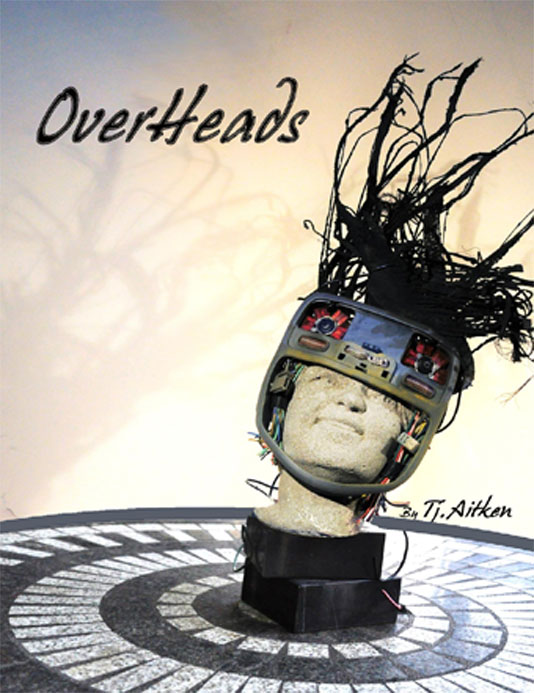 OverHeads is a photo book containing over 20 of Tj’s sculpture series by this name. Each piece is about a modern spiritual condition and uses an automotive Overhead console to construct. Each also has an essay created in the studio as he worked on them, and used to guide the material manipulations.

When they were shown at the Civic enter with the writings on plaques , people commented that they should be a book. This is finally it.

"The works in this book were originally a tithe during a time of transition from industry to fine art. The intent was to spend time in prayer and meditation
while I readied the Studio for the business of full time sculpture. I had works going in many veins, but this was a pause and a reflection period to deepen a
spiritual relationship."

Most of these sculptures were completed in 2005 - 06 and readied for an exhibition by early 2007. A few came a bit later as solutions arose to starts from the
original period. Some have been destroyed by nature, a few were sold.

When Chronic Lyme Disease struck our family and the need to raise funds for medical bills became pressing, the OverHeads were called up as an offering to those who might help with the cause. This book was started in 2007 and completed in late 2015 for dedication to all who suffer from this illness.

Give a copy to a friend and help a person who wears a fairly normal mask on the outside but who's insides are more like these images, calling out in pain, dizzy
and afflicted with anomalies that are grievous. Americans seem OK, but we suffer spiritual conditions that should be unmasked.